WATERVILLE, ME [2/1/19] – The City of Waterville is pleased to announce a Request for Qualifications (RFQ) for the Riverfront Gateway Project on a 1.5-acre parcel of city-owned property located at Head of Falls in Downtown Waterville. This is a unique opportunity to enhance the look of the city’s downtown riverfront through the construction of a mixed-use development project.

Due to the site’s strong central geography and proximity to the city’s high population core downtown district, this project will serve as a ‘gateway’ initiative and support an associated network of adjacent downtown developments and community assets. It is the intent of this project to symbolize the economic, cultural, and historic nature of both Head of Falls and Waterville’s downtown.

The entire Head of Falls area consists of over 20 acres of primarily undeveloped land with approximately 4,600 feet of frontage along the Kennebec River. The 1.5-acre Riverfront Gateway Project site is located in the southern portion of Head of Falls and enjoys existing public infrastructure.

Historically, Head of Falls has been the focus of several planning studies, including the recent downtown and waterfront revitalization initiative in conjunction with the City and Colby College. This initiative will result in over 100 million dollars in investments, including six (6) downtown development sites purchased by the College. The centerpiece of this investment is The Bill & Joan Alfond Main Street Commons – a $25.5 million civic-retail-mixed-use facility with approximately two hundred (200) students and faculty in downtown. In the summer of 2018, the City completed a $1.5 million “RiverWalk” at Head of Falls alongside the Kennebec River. This development contains features such as a quarter-mile walkway, a 150-person granite amphitheater, children’s play areas, and a gazebo.

For this RFQ, the City is seeking statements of qualifications and a narrative description of previous development experiences and concepts from qualified developers/development teams to develop a mixed-use development project at Head of Falls. “This is an exciting opportunity for the City of Waterville to partner with a developer to create an impactful mixed-use concept for one of the most beautiful sites in the city,” said City Manager Mike Roy. “In order to continue to enhance the City’s economic base, and target Waterville as a downtown destination, we’re pursuing this opportunity to anchor the Head of Falls area and continue the vibrant transformation of the downtown, with pedestrian-friendly access, shops, restaurants, offices, housing opportunities, and arts activities.”

Responses to the RFQ must be submitted on or before 5:00 pm February 28th, 2019. The RFQ and more information about this development opportunity can be found on the City of Waterville’s website:
http://www.waterville-me.gov/wp-content/uploads/2019/01/Head-of-Falls-RFQ-2018-1.pdf 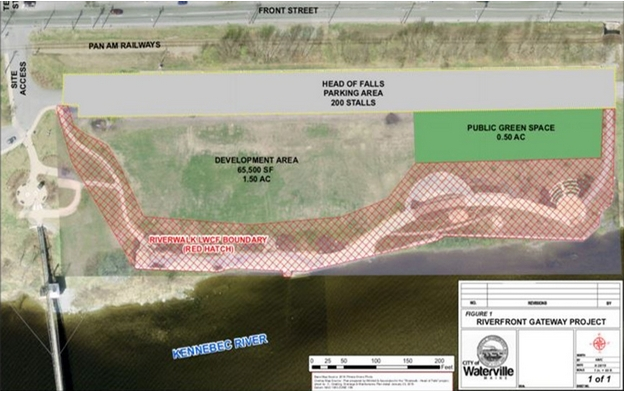