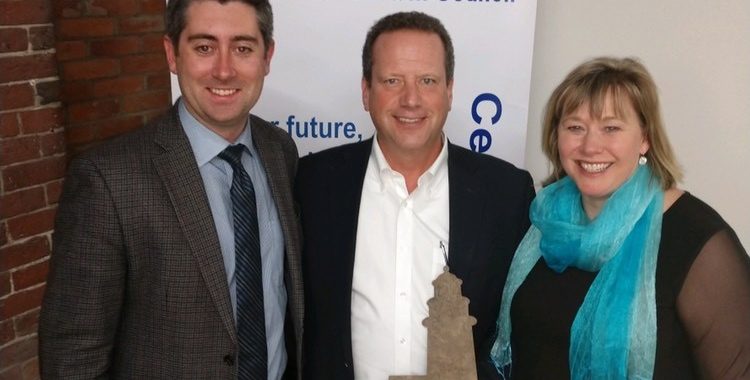 WATERVILLE, ME, November 15 – Central Maine Growth Council is proud to present its annual Developer of the Year award to Mr. Bill Mitchell, owner of GHM Insurance Agency and co-owner of The Proper Pig restaurant in downtown Waterville.

In addition to his leadership at the aforementioned establishments, Mitchell has played an active role in real estate development in the greater Waterville region. While he owns over a dozen properties in the region consisting of 40+ tenants, many of them national companies, his most well-known include KMD Plaza, Penny Hill Park, and the Masonic building overlooking Castonguay Square.

Mitchell’s redevelopment of the Masonic building in downtown Waterville represents the heightened interest in downtown Waterville as a commercial and residential destination and it contributes to downtown’s revitalization. The building is currently 100% occupied by 14 outstanding tenants, which contributes significantly to the development of downtown.

Most recently, Mitchell purchased the former American Legion building in downtown which offers units ranging from 1,000 to 10,000 square feet and plenty of coveted off-street parking, and three properties on Main Street in downtown (220, 222, 224 Main Street) and is in the process of redeveloping all three buildings. 222 Main Street will feature three fully renovated apartments and is Mitchell’s second apartment property in Waterville.

For more information on these properties and other locations owned by Mitchell in downtown Waterville and on Kennedy Memorial Drive, please call (207) 873-5101.

Part of the legendary Mitchell family which has been embedded in the fabric of Waterville’s history, Mr. Bill Mitchell enjoys a close relationship with the community and his real estate development activities are important contributions to the city’s bright future.

“Bill’s commitment to the City of Waterville is evident in the care and thought that he puts into his projects. He is restoring the city’s history and creating spectacular spaces which attract new businesses and new jobs to the region,” says Garvan D. Donegan, director of planning and economic development for Central Maine Growth Council. “It has been a pleasure working with Bill – he is a true partner in realizing our collective vision for a vibrant downtown and thriving region.”

For his part, Mitchell is encouraged by the direction of Waterville’s progress and is pleased to give back to the community through his redevelopments. “I am very bullish on Waterville’s future, not only in real estate development but in all regards. With the complete renovation of 173 Main Street, the new student housing building recently opening, a new boutique hotel on its way, the redevelopment of The Center into an art museum and film center, and the completion of the new River Walk at Head of Falls, the future of Waterville and the surrounding area is very bright. There’s no better time to be living and working in Waterville, and to be investing in Waterville’s future. I’m very excited to be part of such a great community renaissance.”

Central Maine Growth Council thanks Mr. Bill Mitchell for his significant contributions to Waterville’s revitalization, and looks forward to further real estate development from the region’s 2018 developer of the year.